Happy New Year! Don’t you love this time of the year – shiny, fresh and filled with endless possibility. Having a break from the sewing machine has been good for me, even though it is HARD guys, so hard. But I knew it would give my creativity a much needed boost and I was right – now all I want to do is sew all the things.

I wanted my first post of 2018 to be as meaningful as my last post of 2017, Stella’s memory quilt. And for that reason today we take another trip down memory lane and talk about beautiful Eddie. Both of these memory quilts remain the most important makes I have created to date and that is why it was so important to me they be part of my blog. They epitomise my ideas around handmade, community and the legacy I want to pass on to my children. We talk a lot in our house around kindness, making sure that your actions positively impact on the people around you and the idea of just being good people. My children love that I make memory quilts and I find them all incredibly invested in the process and the story behind it. As a mother I dont think I could do anything more important.

So it is with incredible pleasure I share Eddie’s story with you all today. It reaches all the way back to 2014 when I launched a competition on my page for photos around special firsts, which was celebrating Hannah starting her first year of school. Jody entered the competition and sent this beautiful photo in of her 3 boys Charlie, Henry and Eddie.

A week or so later, after seeing the beginning of the journey to make Stella’s quilt Jody contacted me again and I learnt that Eddie had passed suddenly and unexpectedly. Jody had 2 suitcases of Eddie’s clothes that she wanted me to work with. As always, I was incredibly honoured and immediately said yes. In the October of that year I received the clothes and we started the journey. As with Stella’s I put up a facebook album as I went which I will use again now to tell the story, again with some gorgeous family updates at the end. Many of these words are Jody’s own – I dont believe I could ever have written his story as beautifully as she did.

I feel like here I need to say a few words about Jody. Her grace and beauty shone through in every conversation we had, from her incredible patience in waiting for me to start work on Eddie’s quilt to her care and understanding of my own unique family situation.

“Words cannot express enough the joy he gave us in the short time we had him in our lives. He left only happy memories as he was so perfect. His smile was so infectious, it would light up a strangers face. People were drawn to him.”

“One of many fond memories I have was the day I took him to the July toy sales. The trolley was so overloaded with toys to the point I was pushing the trolley and also carrying toys. In amongst the toys in the trolley was Eddie. Just lying there awake, smiling. You got so many smiles from strangers that day”

“Eddie and I were inseparable. I would take him everywhere, not in the pram but carrying him as I always wanted to hold him, even though he would give me sore arms because he was getting so big. Often I would stop whatever I was doing, turn around at him and he would already have his big blue eyes locked upon me, and without any prompting, he would just burst out laughing with his big belly chuckle or high pitch scream of excitement. I think it was his little game he played with me. These are the little things that I miss so much.”

“He was taken by ambulance to hospital where he was pronounced deceased. We spent time with him before we were told we had to hand him back over. I didn’t want to let go or stop hugging him. I just wanted to run away with him. It felt so wrong leaving the hospital that night without our son. We had lost our treasured boy and gained an indescribable ache that no parent should ever have to endure. No amount of self-talk, mindfulness or manifestation can overcome the ache. The ache intensifies, especially leading up to anniversaries, birthdays, Christmas and what would have been life events for our son”

“Since Eddie’s death, I’ve come to realise that some healing can take place and some life joys can be found, despite our ache being an enduring consequence of our son’s death. I suspect that the ache will always be with us because we will never ever stop loving our lost son. As is evident from research surrounding grief patterns, there comes acknowledgement and healing. Three years after the birth of our boy, who is no longer with us, we experienced a major ‘life’ event, which has been like a healing balm. We were blessed with the arrival of a baby girl.”
“I have also learnt that a mother’s love can never be retracted, even if her child is absent forever more. Therein lies the source of the persistent, fluctuating ache”

Eddie’s quilt was such a joy to make, it was a simple pattern but it showed off his clothes so well. And I have been so lucky to stay in touch with Jody and watch this beautiful family grow through the years. In fact it was Jody who helped me redesign my new labels for 2018, she is one clever chicken. It is also with great joy I can update you on this beautiful family.
In 2016 gorgeous George was welcomed in to the world, healthy and oh so loved.

And only a year later look how much everyone has grown! Mavis’s smile hasn’t changed even a little bit from that gorgeous photo that was sent to me so many year ago. 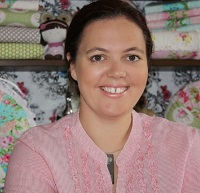 I am a proud member of ARC

© 2020 Piccolo Studio - All content is the creative work of Sarah Scott of Piccolo Studio or other talented artists I have sourced. Please do not use images or content without written permission